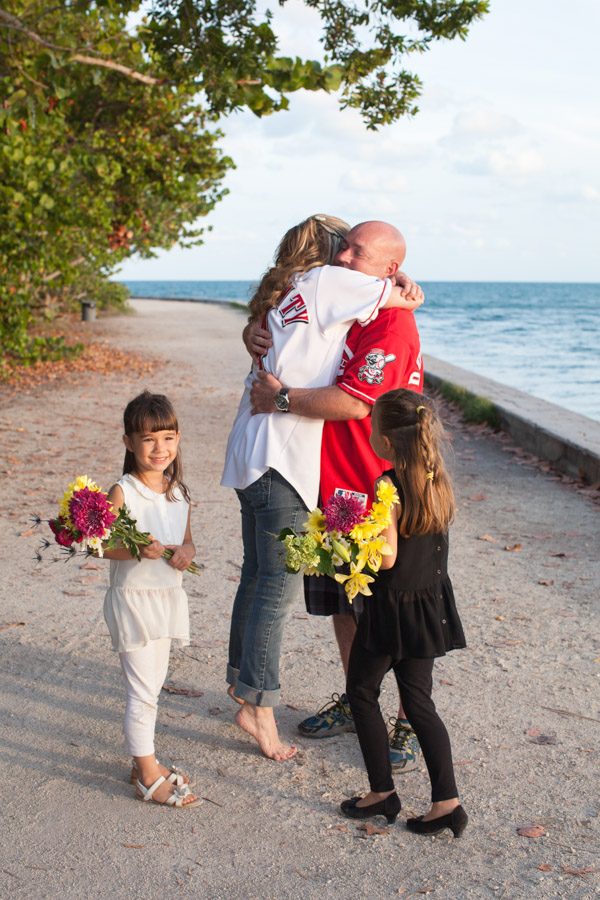 I so loved photographing these two and their family on their wedding day! We met at Bill Baggs State Park, which is at the very end of Key Biscayne. It’s located close to the historic Cape Florida Lighthouse. Lisette mentioned to me that they were hoping to get a beautiful sunset for their ceremony.

I anxiously looked at the weather, which had been cloudy all day. I know from the past that the weather can change in a short time, so it’s best not to worry about it (still hard to do). As I drove from Miami Beach to Key Biscayne, the weather began to change. The clouds opened up to a beautiful blue sky, and the sun cast its bright light over the island.

it was a very small, intimate ceremony. They chose to wear jersey tops and casual bottoms – my kind of people! They are so down to earth, warmhearted and loving people. Since I arrived a bit early, I had the chance to photograph the girls – I adore the photos of them hugging! They are incredibly sweet and charming kids.

Once the wedding officiant arrived and the papers were signed, the ceremony began. It was a beautiful and emotional moment. We took advantage of the warm light from the setting sun, photographing the four of them just before the island would be engulfed in the blue cast of twilight.